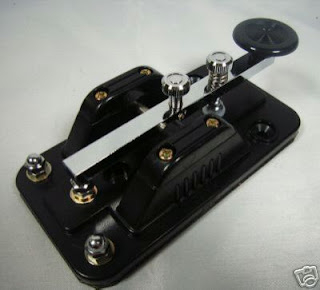 I first learnt Morse Code or CW when I was 19 years old. I remember learning it... but I don't exactly remember HOW I learnt it if you see what I mean. I have memories of a Morse code tutor program on a borrowed ZX81 computer (remember those?). I remember Morse code practice sessions at the weekly radio club meetings in Port Talbot. In fact I seem to remember this Morse business went along fairly easily, and before I knew it I had passed the 12 words per minute test, as was required in those days and I earned my full UK licence.
Its not as if I threw away the key, and forgot all about Morse (as many did after gaining HF access). No sir, I promised the amateur who taught me CW that my first QSO on the HF bands would be on CW, and it was, on 40 metres. I went on to use CW fairly frequently after that. Of course at that time I was somewhat younger- about 22 years younger in fact!
Over the passage of time there have been times when I wasn't active on the HF bands, house moves, relationships etc etc meant that at times I was a fairly inactive radio amateur. When I did eventually get re established with an HF station I guess my confidence in CW operating had gone and I became an SSB and latterly data modes enthusiast.
So this year as I mentioned a little while back it is my intention to get back on the air with CW. Now It shouldn't be that hard-should it? I remembered most of the code-so its just a matter of practise and getting my speed up! Its funny but I don't rememer first time around having problems confusing the letter B with the number 6, the letter H with 5 and so on- but I am having those problems now!!
As much as I hate to admit it but it must be AGE. I am someone who has been lucky to enjoy good physical health, in fact I don't feel much different in that way to how I felt 20 years ago. But my brain obviously does! Still I will keep plugging away at the CW. This time however, when I do get my CW up to speed I will be making sure I practice enough to keep it that way.
Posted by GW0KIG at 20:14