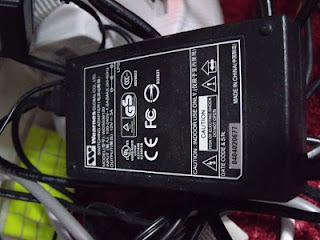 For some time I have been aware that one of the PCs in the shack does generate a little interference on the HF bands. However I have recently noticed that I have a constant carrier of the 2 metre band on 145.575 Mhz. The carrier is around S4 and always seems to be there.
Using my two metre handheld the other day I tracked down the source. Placing the handheld next to the power supply for my LCD monitor the carrier went up to full scale on the S-Meter. Unplugging the power the supply caused it to disappear.All is not lost as the monitor needs a 12 volt DC supply so if I make up a connector lead it should run quite happily from one of the shack supplies.
HF conditions do seem to be improving. Yesterday I worked several stations on PSK31 on the 18Mhz band which seemed very lively. Let us hope this is a sign of things to come.
I continue to be fairly impressed with the Wellbrook loop. From its temporary location I am able to rotate it using the famous "Armstrong" method. I have found it is possible by careful positioning to almost elimate the PLT i get on some bands. The loop also allows me to reduce a lot of local QRN. It is very directional below about 5Mhz or so. If you have two medium wave stations on the same frequency it is possible to null one out by rotating.

Out in the cold! 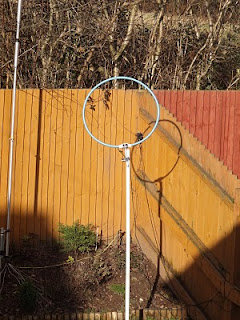 The dry weather today finally allowed me to get my Wellbrook loop receive antenna up outside. I removed it from the loft this morning. It is now out in the cold, temporarily mounted in the Garden, on a length of plastic pipe. This is not going to be its permanent home,it is a little too visible where it is at the moment and the YL doesn't like it! I think I will end up putting it on the back fence but I will need to extend the coax cable feeding it. It will also need a piece of wood or plastic across the loop itself to strengthen it. At least for now though I can test it.
I was inpressed with the loop on the low frequencies, particularly 80 and 160 metres as well as Medium Wave, even when it was loft mounted. As good as the loop may be however it is not a "magic" antenna and it still picked up lots of noise in the loft, although I must say less than a wire antenna would have.
My first impression of using the loop now its outside was the way in which I could null out some of the local noise here. On some HF frequencies I am getting S9 of noise from an "internet over mains" system or Homeplug as I believe they are called. By carefully positioning the loop I can reduce this noise by 4 or 5 S points.This excercise did remind me that I must try and trace the source of this noise and consider reporting it to OFFCOM. It is only audible on my external antennas, a portable radio with a telescopic antenna doesn't receive it.I guess this means its not coming from a near neighbour, and may be a few hundred metres away.
The loop is certainly quieter now that its outside and as I get time to use it I will report more on its performance. I am looking forward to testing it on the amateur and Broadcast bands.
As an indoor antenna I would say that it is superior to a wire dipole in the loft for example but don't expect too much. I have seen reviews where it has been said of similar loops that they received fine with very little noise even when placed in the shack! That has not been my experience. I would say however if you are limited to an indoor antenna the Wellbrook loop will give reasonable performance and on some bands is comparable to an outdoor wire.
As I type this I am listening to a QSO on 160 metres between two G-stations, Both are stronger and clearer on the loop than they are on my Inverted L wire. Quite amazing when you consider the compact dimensions of the loop.
Posted by GW0KIG at 20:56 1 comment: 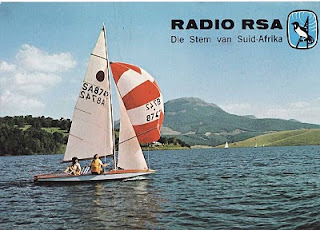 Listening on 2 metres on my way into work the other day I heard a couple of amateurs talking about an opening on 10 metres this week. Apparently the 28Mhz band was open into Europe up until around 2100. Needless to say I missed that opening, and although I have been listening on 10 metres for the last couple of evenings I haven't heard anything.

When I first became interested in radio, as an SWL in the early 1980's HF conditions and the solar cycle were at their peak. At that time I was using a multiband shortwave receiver with its own telescopic antenna. I can recall being able to listen to CB operators in the USA on 26Mhz at all times of the day and night. Added to this in those days Broadcast stations also used to transmit between 25.5 and 26Mhz. The QSL pictured from Radio RSA was received by me in 1983. RSA used 25790Khz and used to sound like a local FM station such was the strength and clarity of its signal.
Some years later in 1988 when I obtained my full UK amateur licence and was able to operate on the HF bands, the higher bands were still active. My first logbook was full of 10 metre contacts. 10 metres always seemed a band that was kind to operators with simple equipment and low power. Lets hope we will see conditions like this again!
Posted by GW0KIG at 20:47 3 comments: 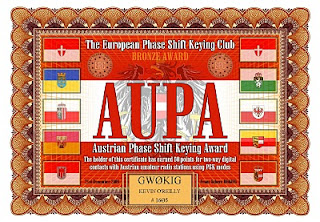 Back in December I applied for some awards from the European PSK Club (EPC) as I am a member and had been quite active on PSK last year. I sat back and waited, expecting perhaps to receive an email notification about my award apllication, but nothing came. Today I remembered Adam M6RDP telling me I needed to check the member site of EPC as notifications aren't always emailed.
But each time I went onto the EPC website I couldn't find the members area! Eventually I established the reason why. I use Google Chrome as my web browser. Its quite fast, simple to use and I can't get on with Internet Explorer 8. As far as I can see in the current explorer Microsoft have hidden the most useful icons and functions. It seems the webmaster of the EPC site has issues with Google Chrome and therefore the site is designed not to work properly with that browser. However I opened up IE8 and sure enough was able to log in and obtain my first EPC award.
My CW learning continues, slowly and I think it will take many months! I have been able to copy some bits and pieces of HF cw Qso's though and that has lifted my CW spirits a little! UU1CC has suggested that I should listen to CW wherever possible, as if it were background music. I am taking this advice and listening to a CW QSO on 40 metres as I type this! 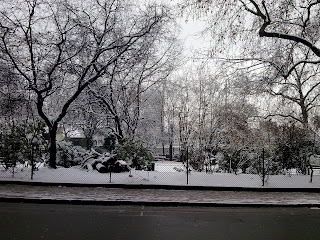 The picture at the foot of this post is entirely non radio related. On a  work related trip to London on Wednesday, this is the view that greeted me opposite the Temple underground station- the first time I have seen snow in Central London. Needless to say the snow I had left at home in South Wales was much deeper but it did seem strange to see London with its white covering!
Posted by GW0KIG at 15:35 2 comments:

use it or lose it. 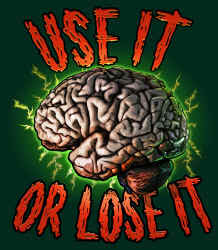 I have been trying my best to improve my CW skills over the last few days but I can already see it is going to be a long journey. I have been amazed at how much I have forgotten! There are some excellent software packages which help, in addition to "Just learn morse code" which I have previously mentioned I have also been using "Morse Machine" and "Morse Gen" by Julian G4ILO. These programs along with some casual CW listening on HF have formed the start of my quest. I am now however a firm believer in the saying "Use it Or Lose it"!!
Still this learning keeps me busy when the bands are not good. 80 and 40 metres seem very noisy here lately and my radio activity over the past few days has been confined to few local QSOs on 2 metres along with a single PSK QSO on 30 metres.
Posted by GW0KIG at 20:18 3 comments: 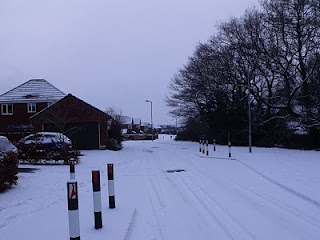 Further to my last blog I have been starting to re-learn CW or Morse if you prefer.Paul PC4T  mentioned a free piece of software called CW-freak however I found that this software dodn't seem to want to work on the Windows 7 based PC that I am using. I have found another piece of software called"Just Learn Morse Code" by LB3KB and am trying to devote a little time each evening to my morse studies!!


I had a little more time for radio today than I expected. Due to the heavy snowfall here in South Wales I was unable to get to work. The picture today shows my street as it appeared this morning-covered in snow! Snow like this is not that common in this part of the UK and as I write this most of it is still around and we are likely to have sub-zero temperatures overnight so the journey to work tomorrow should be interesting.
Anyway I ventured onto 40 metres SSB this afternoon and made a couple of contacts before moving onto the PSK31 mode.
Posted by GW0KIG at 19:58 1 comment:

Well here it is- my first post of the new year!
Happy 2010 to all who read this. I am not a great believer in new years resolutions but I do have one radio -related resolution and that is to start using CW again.

I obtained my first amateur radio licence back in 1984. In those days passing the radio amateurs exam earned you a class B radio licence which allowed you to operate on 144Mhz and above. In order to use the HF bands you had to pass the morse code exam both receiving and sending morse at 12 words per minute. I did this and obtained my existing callsign in 1988.
I learned morse code at my then local radio club. The tutor was a very enthusiastic CW man and made me promise that my first ever contact on HF would be on CW. I kept this promise and for the first couple of years used morse fairly regularly.
Over the years for various reasons my amateur radio activity was a little patchy. When I did get back on the air properly I had lost confidence in my CW skills and switched to operating on SSB and in more recent times the data modes. what I need to do now of course is to set some time aside to re-learn my morse receive skills!
Morse is an interesting mode and it can enable a simple low power station to work much further than an equivalent equipped SSB station.
So that's my intention, watch this space to see if I have any success.
Radio operation here has been limited over the last couple of days. I have been using WSPR, mainly on 80metres and was very pleased to see that my 1watt signal had been heard in the USA. The funny thing is that I haven't ever worked the U.S from here on 80 metres, even with 100 watts. I guess that just shows what an amazing mode WSPR is!
Posted by GW0KIG at 19:00 2 comments: