This blog has been quiet of late. Partly this is due to the fact that I recently had to spend a two week period in London due to my work. Not much chance for radio there but I did bring the tiny Baofeng Handheld radio. Whilst I did hear a few simplex QSOs on two metres and was able to pick up one 70cms repeater activity was pretty low. Things have changed as I recall being in the London 10 or 12 years ago, maybe a little longer than that and then the two metre band was buzzing with activity.
Last weekend I was back at home and since it was a dry calm day I decided to take down the mast that held my Watson dual band VHF/UHF antenna and investigate the SWR problem I had/
I had suspected that as the antenna had been up for 3 years or so perhaps I had a bad connection in the PL259 plug or the coax had completely pulled out of the plug somehow.
Once I got the antenna down the problem was obvious. 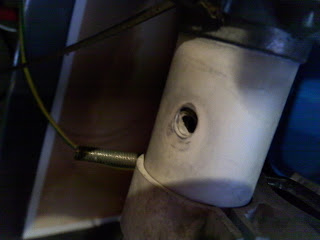 What you are looking at is the support tube that the "white stick" fibreglass antenna sits on. The hole in the picture should have a screw in it! The screw goes through the support tube and into the base of the antenna itself securing the two together. As you can see the screw isn't there. This meant that the only thing securing the antenna to the mast was its own weight and the cooax cable that was attached to it. It seems that over the months the antenna was able to rotate enough to unscrew the PL259 plug from its socket. I found the coax cable and the PL259 plug were fine, its just that the cable wasn't plugged into the antenna anymore!
I have used this type of antenna at several QTHs with no problems. It is however a worrying thought that the only thing securing the antenna was this one small screw. The support tube was securely clamped to the mast, but the antenna was no longer secured to the support tube. I have been very lucky here that once the screw failed the antenna didn't simply blow off the mast. I will need to find a replacement and possibly look a a way of stopping this happening again.
I won't be re installing this antenna at the moment anyway as I am using my loft mounted antenna for VHF. It is fairly likely that I will be moving QTH in the next few months so I will re erect this antenna at the new place.
Posted by GW0KIG at 16:48 2 comments: