A pleasant evening in the shack tonight. I had a couple of hours to spend and ended up having a few nice QSOs on 40 metres SSB.
I had a nice surprise when just as I was about to close down I was called by PC4T, fellow blogger Paul.
Its always nice to have a QSO with one of my Blog friends.
So thanks for calling in Paul. It was great to work you. Lets hope its the first QSO of many.

The "Western HF 10" antenna I recently install came with an information sheet recommending that it is installed with a centre support. At my QTH I have a small mast mounted on the back of the house and another at the end of my garden. In other words-no central support. The antenna although in itself lightweight has quite a large balun at the end of the 450 ohm ladderline. 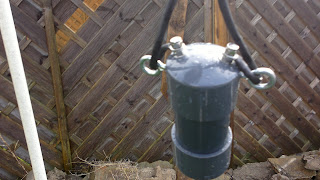 I quickly found that if the balun was left hanging freely it put too much strain on the coax cable going into the balun. The result was the cable was pulled out of the PL259 connector requiring re-soldering. 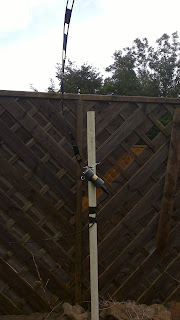 I have now installed a short support pole underneath the feedpoint of the balun and anchored the balun and the coax to it-that appears to have solved the problem.

I am very impressed with the antenna. It can be operated without an ATU on a portion of 80 metres and 20 and a large portion of 10 metres also. On the other bands down to 80 metres the internal ATU in my rig tunes it easily.The antenna seems very lively, especially on the higher bands. It will tune on 160 metres using an external ATU but signals on that band seem very low (The antenna is far too short for the band) and I think that anything other than local contacts on 160 would be unlikely.
It has coped well with the 300+ watts I have occasionally used when trying out the borrowed vintage KW1000 linear amplifier I have in the shack at the moment. 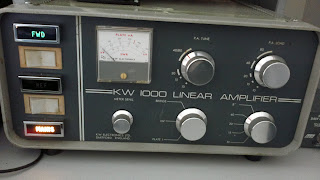 As an added bonus this antenna seems very useful as a general shortwave listening antenna. I have hooked it up to my R5000 receiver and had some good results from around 3Mhz up to 30. On medium wave it does seem a little "deaf" obviously this is the same problem as 160 metres and I wouldn't have expected this antenna to work well on MW.
All in all as a compact antenna this one is really quite impressive and the quality of construction is excellent also.
Posted by GW0KIG at 19:30 No comments: