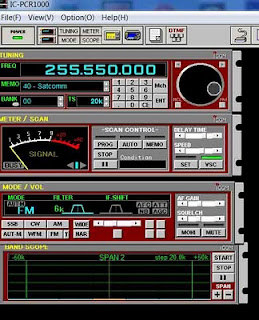 About 18 months ago or so I bought a second hand computer controlled scanner- an Icom PCR1000. This little set has wide coverage from around 100Khz to 1300Mhz.
Its not too good as a shortwave receiver but it performs well enough as a scanner. I connected it to my backup VHF/UHF antenna- a Dualband colinear in my loft, programmed it up with a few Airband, Marine Band, PMR446 and various other frequencies and it happily scans the bands when I am in the shack and remember to turn it on!
A few months ago I read that there were US military satellites that had outputs around 255mhz, I programmed a few spot frequencies into the Icom and forgot about them, so whilst working from home this afternoon I was very surprised to hear 255.550Mhz spring into life.
What I heard was however not any military type communication, rather it was a CB type conversation in what I believe was Portuguese. You see these satellites have a problem with piracy-the bulk of the pirates that are using the satellites appear to be in Brazil. There have been crackdowns and raids but the problem still goes on.
If you are interested there are more details here and here.

In the meantime I am quite impressed that my little Icom with its loft mounted vertical (which of course is a long way of resonance on 250Mhz) is picking these signals up.
Posted by GW0KIG at 19:55 No comments:

Last year and over the first couple of months of 2010 I had been quite active on HF, largely using PSK31. As I result I had sent out quite a few QSL cards via the RSGB bureau but had received nothing back.
This week I had my first batch, around 12 cards- no DX but its nice to know the bureau is working.
Here are a couple of the cards. 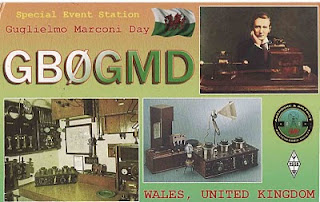 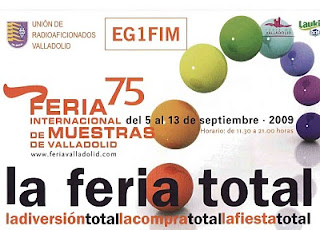 Just a quick note to say that I have had to enable moderation for comments on this blog. This will mean that if you are kind enough to comment on any of my posts it may take a liitle while for your comment to show up here- not too long as I usually regularly monitor the blog.  I regret having to moderate the comments but I seem to be attracting quite a few Chinese "Spam" comments recently!
Posted by GW0KIG at 19:26 3 comments:

There has been a distinct  lack of postings to this blog in the past week. This has mainly been due to the fact that I have been away on the sunny island of Fuerteventura. So not much to report on the radio scene then, although I did manage a little bit of SWLing on my trusty Sony 7600 and reel out wire antenna as pictured below. 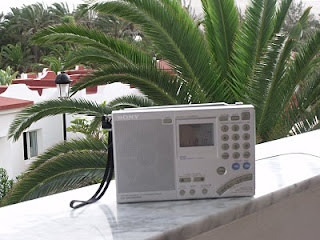 Apart from the Usual broadcast stations I did pick up a little on the Amateur bands, mainly 20 metres where I heard a JA, a couple of PY stations and a few Europeans. Its always interesting to listen (or Operate) from a different location. Locally the FM band in this part of the world is pretty quiet with 3 or 4 Spanish language stations. Medium Wave is similarly quiet although with the nearest mainland land mass being the Western Sahara perhaps this is not surprising.


As a new departure for this blog I will mention a few non radio bits! When abroad I love to read. Of the Three books I read last week my favourite was written by the now BBC Radio 2 DJ Chris Evans

"Its not what you think" is a book which I found to be written in a down to earth, informative and amusing yet inspirational way. I am aware that many people may find Mr Evans a rather annoying character (personally I find him entertaining) but the book is well worth a look anyway!
And finally for this post, whilst I was away of course Spain won the World Cup. As you can imagine being on a Spanish Island the celebration of this win by the locals was quite interesting. The short video below gives a little example of the kind of celebration that I think would not be allowed in the UK. Bear in mind that I was staying in a very quiet resort in an area which normally had very little traffic. There were quite a few Dutch fans around that night and it was wonderful to see the way in which the Spanish and Dutch were shaking hands and laughing together-very sporting and a good example to us all.

More on the Softrock 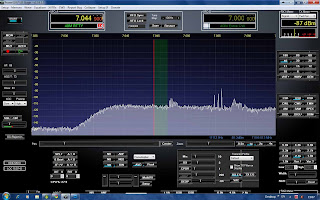 I have been loaned another Softrock SDR radio. This one connects to to the 8.83 Mhz IF output on my Trio TS830. Therefore wherever the TS830 is tuned the Softrock gives me a second receiver with a bandspread of plus or minus 24 Khz from the frequency the TS830 is tuned to. It also gives me all modes AM and FM which the 830 doesn't have. Its a novelty to be able to listed to AM from the 830S.I am playing around with the "Power SDR IF" software which seems to work quite well. All in all very interesting but I still haven't worked out how to properly interface the Softrock for Data decoding.
Posted by GW0KIG at 19:27 No comments:

HF conditions seem to have been pretty poor over the last few days. A few of us locally have been working 6 metres FM as an alternative to 2 metres. 6 seems a very under-used band, unless conditions are good that is when everyone seems to come out of the woodwork.

Anyway there was a bit of PSK31 activity on 10 metres today and I worked I4UUL who has a very good picture of CAT control equipment on his QRZ page- I just thought I would share it here! Now if only I could get one of the shack cats here to pose like that. 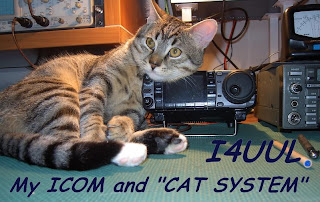