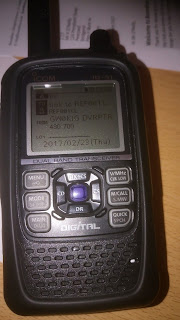 Almost 18 months ago I was getting ready to move home. All my radio antennas were taken down ready for the move apart from my Wellbrook loop which was mounted on a short pole in the garden and could be removed at the last minute. so I could listen on shortwave but that was all.
In preparation for this I had purchased an Icom ID-51 Handheld radio. This is a dual band VHF/UHF Handie which also has D Star Capability. Now in the past I had not really been attracted to the idea of D Star as it  depends on either using repeater, the internet or both.  But I convinced myself that it would allow me some form of communication whilst I had no antennas and no proper shack.
Along with the Icom Handheld I bought a "DV Mega" hotspot, basically a miniature transceiver with an output of 10mw which connects to your PC (or Raspberry PI- more on PI's later) and transfers the RF from the handie onto the internet and vice versa.
Well It took me some time to set all this up and get it working- D Star seemed like a mystery to me at first and I won't bore you with all the details but eventually i got the system running OK. And yes it is quite a novelty to speak to other operators all over the world using a handie. I can see how this system is a godsend to Radio Amateurs who find themselves unable to put an antenna up or perhaps are travelling and operating from hotels and so on. It does however lack the "magic" of a direct HF contact and in my opinion isn't real radio in the true sense. Take away the internet and you are just left with a short range handheld.
Now I am in my new QTH, I have set up my shack and some simple antennas and am back on the air. I still have the d Star equipment of course and yes I still use it. It is fun to be walking the dog and working Puerto Rico on a UHF handheld as I did the other day. Using the system has also introduced me recently to the joys of a Raspberry Pi computer and  the Linux OS so it has provided a learning opportunity.
But "Real Radio"- its not- as long as we use it as an addition to the hobby and not as our main activity I see no harm in systems like D Star and DMR. We just should remember that its a good idea to retain communication systems that are not internet dependent.
Posted by GW0KIG at 20:05 No comments:

A little while after moving to this QTH I joined the local radio club. Always a good way of getting to know local radio amateurs in a new area and an opportunity to chat to like minded people and share knowledge. One evening I mentioned that I used a few SDR receivers in the shack. A number of the club members were not familiar with SDR and to cut a long story short I ended up offering to bring along a couple of my receivers and give a demonstration.
Whilst I was planning my demo I realised that as the club meetings are in the evenings and HF conditions have been very poor lately it was quite possible that we would have very little to listen to. Then it occurred to me- Most SDR software has a facility to record. Not simply to make an audio recording, although it can do that as well as required. The clever bit about recording from an SDR receiver is that you can also "record" a whole bandwidth of signals. In the case of my Elad SDR radio it can receive and record up to 6mhz of bandwidth. The picture below shows it receiving the full 6mhz using the SDR console v3 software. 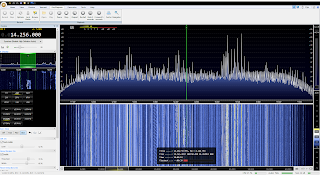 Using this facility I was able to record part of the spectrum in the daytime, when the bands were busy and use this to demonstrate the SDR software and receivers.

The received part of the spectrum can be recorded onto a hard drive (or any other media). When played back you can tune through the spectrum (in the example above from around 11 to 17 mhz) using whatever mode you want.
In effect you have a snapshot of that bit of the HF spectrum which you can listen to as if you were sat at your receiver when the recording was taken.
This set me thinking, if only we had this technology years ago. Today we would be able to tune through the HF bands of the 40s,50's 60's as if we were there!
I wonder if anyone is recording the bands on a large scale now. The downside of this is at the moment these recordings use a lot of space. The recording in my picture above was for a 10 minute recording of 6mhz of spectrum which used 7gb of storage. I reckon to record the whole 30mhz of LF/HF (if you had a receiver with such a wide bandwidth) for 24 hours would use in the region of 8.4 tb. If you were attempting to record for any length of time you would need a massive amount of storage. But just imagine if we were able to tune through the bands of yesteryear!........................................
Posted by GW0KIG at 19:10 No comments: