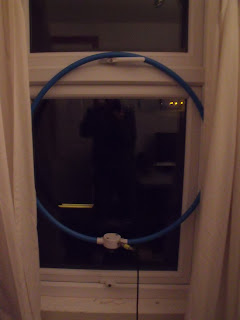 When I moved to this QTH one of the first things I did was to hang the Wellbrook receive loop in the shack window to see what I could receive.
In the past although I had read that the loop could be successful indoors I found that mine picked up too much noise in the shack. I have to say that using it at this location. it has proved pretty effective indoors. I guess this is a quieter location Yes of course it will be better when it as eventually located outside but for now it has proved a very useful receive antenna particularly on the lower bands and considering its location it has worked surprisingly well.
As far as HF transmitting antennas are concerned I was until two weeks ago using a half size G5RV with inductors on it to allow it to tune on 80 metres. The main reason I was using this antenna was that it was quick and easy to erect and I just wanted something to get me on -air again. The '5RV worked fairly well until about a month ago when we had some very stormy weather here in South Wales. Although the antenna stayed up it refused to tune up! Bringing it down I checked the feedpoint, the coax cable, the inductors. I could not find the problem. In desperation I put  up a doublet antenna I had made some time ago. It was a bit of a challenge to fit the 40 metre long doublet in my 20 metre long garden. However folding the ends back I have done it and I am fairly pleased with it on 40 and 80 metres. It also seems to receive well enough on 160metres but a few tests indicate its not very effective on transmit there. Neither is it as good as the little 5RV on the higher bands. Anotherincentive to set up my HYGAIN vertical for 10, 15 and 20 I think!
Posted by GW0KIG at 21:00 1 comment: