Following on from my last post I had also decided that I might try some CW operating when I next use the portable gear. In the past I have worked SSB only but with my very limited antenna system I should get better results with CW. I have two keys here in the shack, both my paddle key and the straight key are too large and possibly too fragile to take along in my portable kit. I mentioned this fact in a conversation on 2 metres a few days ago and a local GW3 friend told me he had three keys that he would be interested in selling.
A few days later he called around with the keys, leaving them with me to try them out and choose the one I liked. 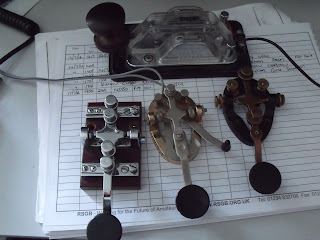 You can see my own "Straight Key" at the rear to give some idea of the size of the smaller keys. Although initially I liked the look and feel of the key on the left,and it had quite a weighty base it wasn't the one I chose. I found it very difficult to adjust and wasn't too happy with the way that the lead that connects it is on the right hand side of the key rather than at the rear. The little key at the centre was my final choice although I really need to find a base for it now. Note the lever to the right of the key. Moving this closes the contacts so that the key is continuously  "down". I wonder was this designed to help "tuning up" so that you don't have to press the key down?
Posted by GW0KIG at 21:10 1 comment:

The Yaesu FT857D that sits in my shack is slightly wasted in its current role as a two metre rig. I originally bought it some years ago to use for portable work and got to thinking that perhaps I should actually use it for that purpose.I also have a portable "Buddistick" vertical and  two suitable portable twelve volt power packs here.
The first pack  large heavy unit which contains a 20ah battery which although its a few years old now still seems to hold a charge. 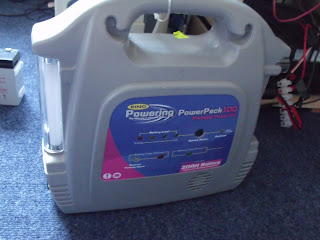 This is a useful piece of kit buts its heavy, not suitable for a long walk and too weighty to pop into a rucksack/backpack

The smaller pack is a lot lighter, it is a 12 volt 4.5ah rated pack. This unit  is older and I have recently found that even after a full charge it was only showing just over ten volts.
With nothing to loose I opened it up and found it contained two 6 volt batteries. 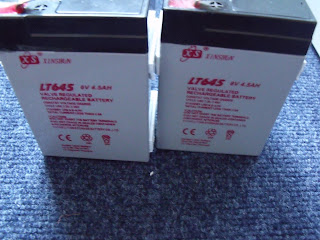 Luckily the electronics supplier Maplin stocks identically rated and sized batteries and I was able to replace these worn out items leaving me with a useful small pack again. 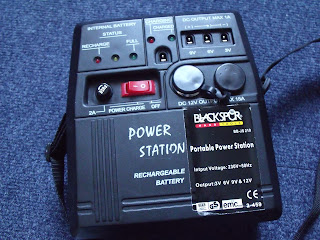 Amazingly for less than the cost of the new batteries I could have bought a whole new unit. I didnt do this because none of the new units I saw were as compact and light as this one and they had features I didn't need such as compressors for inflating tyres and jump leads for starting cars. All this unit has are the twelve volt sockets seen in the picture and a useful light at the rear.

Now all I need is some fine weather and free time to go portable again!
Posted by GW0KIG at 20:58 No comments: