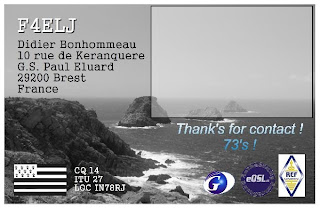 The YL was busy watching the royal wedding this morning so I had some extra "Shack time". I thought I would see if I could find any of the special MR or GR prefix callsigns. I opted for 40 metres, using the TS830 on SSB for a change. I was going to use the TS450 but I couldn't find the mike! Anyway conditions seemed rather noisy but I did get hold of MR0TMW in Co. Antrim and GR0AXY in Edinburgh. Along with GB2SWF (speyside whisky festival). Later I worked F4ELJ in Brest As the band was pretty poor I fired up the SRW linear on 40. You can imagine my embarrassment when running about 350watts I worked PA/DG8KAJ who was running 10 watts!! Well I don't often use the linear so at least I have warmed it up a little. All in all a pleasant morning and quite unusual for me as I havent worked much on SSB lately.
Generally HF conditions seem poor here today with even 20 metres with more noise than activity.
Posted by GW0KIG at 16:08 1 comment:

I use an Icom 706 Mk1 in my car. Coupled to an LDG IT100 auto atu it works well. Press the "Tune" button on the rig and the ATU does its stuff. Although I use mono band whips for the HF mobile the ATU is very useful in broadening the useable bandwidth.  reading the reviews on Eham I recently saw a reference to this mobile antenna  and am thinking about getting one. It seems it is basically a whip with a balun of some sort in the base. Although it would not be likely to be as efficient as a mono band antenna it would, along with the LDG ATU, allow me access to all bands including or so I thought, 50 mhz, 6 metres-a band which I have not used mobile before. 6 metres is output on the same antenna port as HF on the 706
The 706 covers 6 metres as does the LDG atu. BUT as I found out today the 706 will not generate a tuning tone on 6 when you press the tune button. Neither will the atu work on 6 when I generate a carrier from the rig. Why this should be I have no idea. The Specs of the LDG atu state it covers 50 mhz. Now I believe it is a known shortcoming of the MK1 706 that the "tune" button does not work on 6 metres but why the LDG does not react to a  50mhz carrier I am not sure. As it stands though it seems that if I did get the multiband whip I would not be able to use it on 6 metres.
Posted by GW0KIG at 21:58 2 comments: 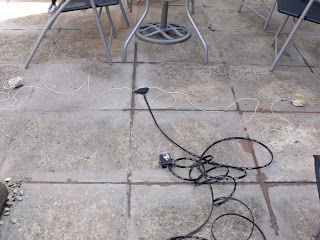 Ok, It does't look much but today I made up a doublet for the HF bands. 40 metre top section, 10 metres of 300ohm feeder and a 4:1 Balun.
Its going to be fun fitting this into the garden, in fact half of it will be in the field behind the house. In any case I am hopping it will be a little better than the shortened dipole is on 80 metres and will hopefully work a bit better on the other bands.
I haven't put it up yet,thats a job for another day.
Posted by GW0KIG at 16:26 2 comments:

Here is the 830 minus its covers 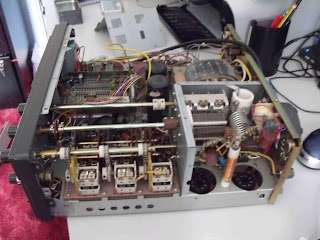 One of the replacement 6146Bs 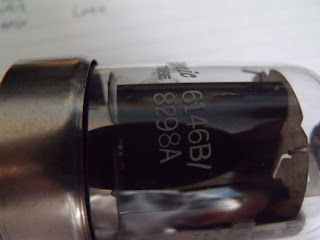 The two valves in Situ 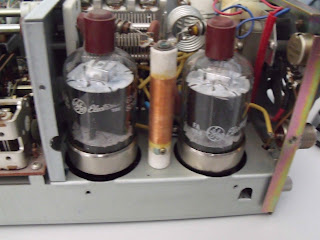 Pa compartment cover screwed back on! 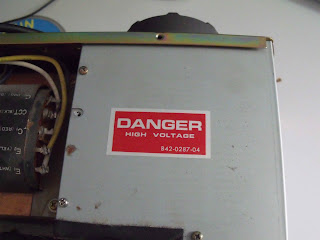 The good news is the 6146bs I had work. The neutralisation process I am not sure about however. As the handbook suggests I tuned the rig up on 28.500, turned the SG switch on the rear off and using my R1000 receiver adjusted  TC1 for a minimum "s" meter reading on the R1000. The only problem was that I didn't get a sharp reduction in the S meter reading, in fact it didn't vary much irrespective of where TC1 was. So I left TC1 more or less where it was with the old PA valves.
At present the rig now has healthy RF output with a pa current well within the specifications. Everything seems stable with no fuses blown so far. I may get a local amateur friend to look at the PA neutralisation issue again before I use the rig in anger though!
Posted by GW0KIG at 16:42 1 comment:

Time for a change?

Well it is for these 6146b valves that I pulled from my TS830s tonight. They don't look in good shape 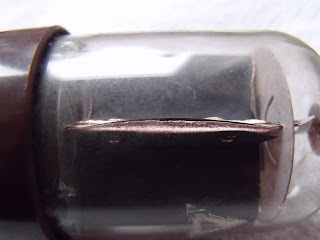 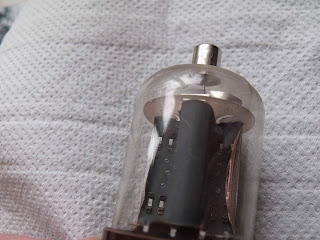 If you don't know how they SHOULD look (I didn't!) I will post a picture of one of the unused 6146s I have shortly. Hopefully you can see that the metal filament in the valve is warped. Both 6146s are basically the same
I think the state of the PA valves may be at least part of my TS830 problems. Next job then is to try replacing the 6146s and going through the neutralisation process.
Posted by GW0KIG at 20:49 1 comment: 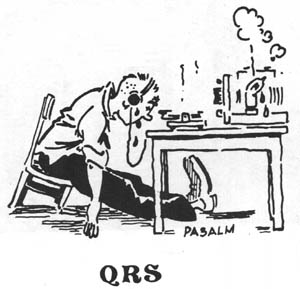 Having finished work a little early today I was sat in the shack, I only had a few minutes as the YL wanted me to take a short walk with her. I decided to call CQ on CW  on 15 metres. Now at the moment I am still using a straight key and I would estimate my sending speed at around 12 to a maximum of 14 words per minute. I was only running 25 watts to my 80/40 metre dipole so I wasn't really expecting any instant replies but immediately UR8IB came back to me. Great.............but hold on, I think he was sending at about 20 words per minute. Well I am pleased to say that I got the basics of the QSO, name and report etc but it was a struggle. His CW was good but a bit too fast for me! Still I am making progress it seems.
On my trip home from work today I was also lucky enough to work on 20 metres SSB R50YG in honour of the Russian cosmonaut Yuri Gagarin.


The mystery of the TS830S goes on. Opening the PA compartment I could see nothing that had obviously blown. I removed and reseated the 6146 PA valves and checked and adjusted the bias adjustment as the manual states. I was then  able to get a reasonable RF output on 80 and 40 metres into a dummy load. Attempt sat trying to tune on 30 metres and 15 metres resulted in another blown fuse and a dead rig.I am lucky in that we have locally here an amateur who is experienced in working with electronics and particularly valved gear. He has suggested the trying a replacement pair of 6146's first (I have a few spares) if this doesn't make any difference he has offered to take a look at the rig.
Posted by GW0KIG at 15:02 1 comment:

Well my TS830s isn't quite as badly damaged as I thought.It is now working OK on receive at least. Why is it now receiving? Well I am almost too embarrassed to admit this-but lets just say its important to make sure the fuse holder in the rig is screwed fully home!!
In any case switching on the heater switch shows that I have some plate current to the PA valves but the current rapidly increases within seconds and if the heaters were left on the fuse would simply blow again. The fault here seems to be similar to the one I had with my small SRW linear- that too showed a rapid increase in plate current. That fault turned out to be a combination of a blown capacitor in the finals stage along with a dying resistor. I hope to get some time over the weekend to open up the PA stage of the rig to have a close look.

I spent some time this evening trying to get the data lead I bought to work with my FT1000MP but to no avail. The DIN plug on the lead was indeed incorrectly wired according to the pinout data in the Yaesu manual. Two of the wires (earth and PTT) were going to the wrong pins. I resoldered these to the correct pins but I still cannot get the software to key the rigs PTT. I think I will stick to the TS450 for data-it works well in this mode and is simple to use. I feel a bit annoyed that I am left with a lead that doesn't do what it was bought for-but I guess it could be easily adapted to suit another rig. I have come to the conclusion that the 1000MP is not really suited to the data modes.
Posted by GW0KIG at 20:06 2 comments:

With the higher bands opening up nicely over the weekend I thought I would try my hand at some CW on 15 metres. I started to tune up my trusty TS830s when it blew the fuse. Not the mains fuse, the fuse in the rig. Since this has happened before I was not too concerned and i had some spare fuses to hand. I replaced the fuse and a few minutes later as i keyed the rig, everything went dead again. This time replacing the fuse had no effect. A totally dead rig, no transmit and no receive. I checked the mains plug but no, that fuse was fine. In truth I knew something was more seriously wrong as when the rig died this time there was a small wisp of smoke coming from the top cover! I took off the covers, hoping to see something obvious, perhaps a blown capacitor but there was no visual sign of the fault. Opening up the PA compartment again revealed nothing obvious. i guess it is time to download the service manual and try to check some voltages so it looks like I am going to have to devote some time to the 830s and maybe seek the help of one of the more technical locals eventually. Since this rig is around 30 years old now and has never let me down before I should not complain.