I have mentioned before about my occasional operating from the YL's QTH  and the high noise level there. In some ways I felt the noise was worse because I was using a vertical antenna (The pro whip) although the noise level was a great deal lower when using the same antenna at my own home.
So what is the cause?  As we all know there could be many causes-Plasma TV's, internet over the mains and so on. But in the middle of the housing estate and very close to the house is this: 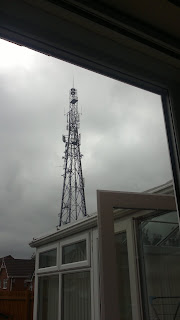 It must be 25 Metres or more high and is covered in all sorts of antennas from what looks like VHF beams and verticals to Microwave dishes. I have no idea what frequencies are being radiated from this mast but I think that at least part of the noise problem may be coming from it. I am just glad its not at the end of my garden, on the other hand I would like to be able to run a wire dipole from the top of it! 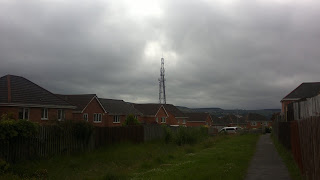 I took a trip down to the West of England Radio Rally today held at Frome in Somerset. This is one of the few remaining rallies that are within reasonable travelling distance for me. The event looked to be fairly well attended  with exhibitors both inside the main hall and outside in the open air, luckily the weather was dry!
The rally was perhaps a little unusual in that there was no talk in station nor was there a bring and buy stand.
A useful rally for picking up those bits and pieces we all need. I emerged with a reel of Coax cable and a book. 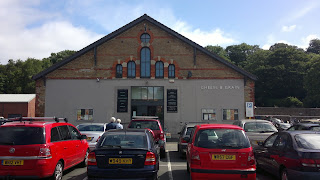 The rally venue "The cheese and Grain Centre" at Frome 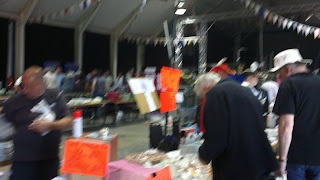 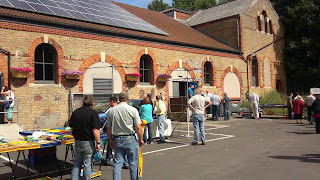 Some exhibitors outside
Posted by GW0KIG at 20:37 No comments:

Interesting evening on 10 metres. I managed to work HB30OK, IS0DCR and EI6JK as the skip shortened. Oddly though I heard a single Brazilian station, at good strength around the same time. Couldn't get back to him on 100 watts to my doublet though! 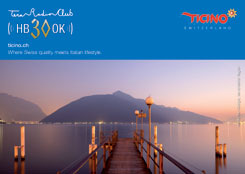 I have been reading quite a bit lately both on the Web and in the various radio magazines about the use of cheap USB digital TV dongles as VHF/UHF SDR receivers. Whilst browsing Amazon the other week, looking for a birthday gift I noticed that they had suitable USB dongles for around £11. At this price I could not resist. Well the TV dongle arrived yesterday. After a few false starts I have managed to get it to work with the "SDR Sharp" software. So far I am just using the tiny vertical antenna that came with it but I have managed to receive some local FM broadcast stations. I have an antenna adaptor lead for the dongle so will see if I can sort out a better antenna. For the very modest cost it has to be worth experimenting with this little unit. 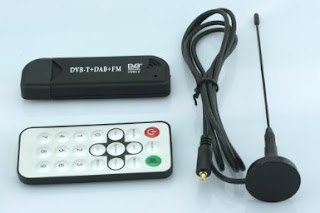 Operating from the "alternative" location this evening. The pro whip  got me a couple of European QSOs (ZA and E73) on 17 metres.Heard a few stateside stations too. 40 metres has S9 noise here tonight, may be band conditions but this is a noisier location than my home QTH. I had the idea to listen to my remote SDR receiver at home using my netbook here to see if I could hear my own signal. No luck though as the RF from the TS450 is knocking out the wi-fi connection on the netbook! 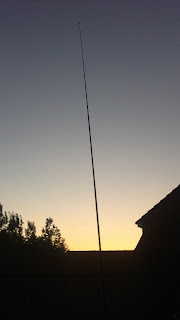