At home a little earlier than usual this afternoon I decided to take an hour out in the shack. 15 metres seemed quite active so I set up the FT1000MP on PSK31 and worked UR4UM  which confirmed everything was working OK since i changed soundcards on this machine.
I left the rig monitoring the bands whilst I pottered about in the shack. Nothing unusual on the screen, mainly European stations with the occasional Stateside signal to be seen. Then I noticed HI8CSS calling CQ from Dominican Republic. I called him, not expecting a reply as surely there would be a pile up and I was running 20 watts into my doublet. He came back to me instantly with a 599 report and I had 100% copy on him. So a new country for me and quite a shock too! 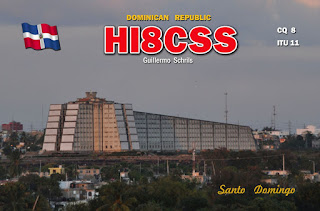 Over the past few days or so I had noticed that the performance of my HF wire antenna (the Western HF 10) had changed. The SWR was higher than usual where it was resonant on parts of 80, 20 and 10 metres the SWR was now 3:1. The rigs auto ATU still tuned it ok on most bands but the receive seemed a little down too.
A physical inspection of the antenna itself showed nothing obviously wrong. I then disconnected the Coax feed at the antenna end and replaced the antenna with a dummy load. The dummy load showed 3:1 SWR. So the fault was in the coax or maybe the PL259 plug. Not surprising perhaps in view of the very heavy rain and substantial snowfall we have had here over the past month.
So out came the soldering iron and off came the PL259. 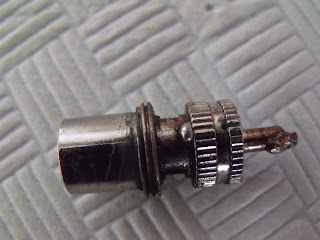 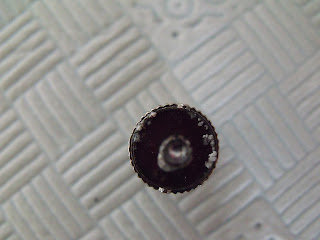 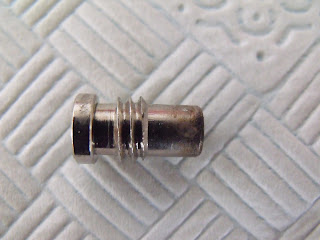 You may just be able to make out the corrosion on the plug in the picture, the body of the plug also looked a little bit tarnished. It seems water had found its way in even though the plug had been given a good covering with self amalgamating tape. Luckily trimming the coax back a few centimetres showed that water had not got that far. A new plug was soldered on and reconnecting, weatherproofed as much as possible and the antenna was back to normal! Thankfully an easy fix.
Posted by GW0KIG at 20:07 4 comments: