At least there wasn't much time for radio operation on my holiday last week in Cornwall.We stayed at a Caravan park near Perranporth, not far from Nequay and about 10 minutes walk to the beach. On VHF just using my Chinese Luiton handie and helical whip  I managed to work back into Wales via the GB3WW repeater and via a more local repeater I worked another Welsh station also on holiday in Cornwall. Overall the 2 metre band was even quieter than it is here in South Wales.

I managed to get out with my HF portable station for just an hour or so one morning, setting up very close to the sea, you can see the pro whip antenna below. 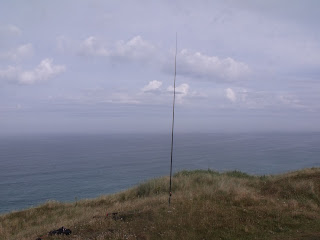 On 20 metres I heard a few VK stations, at good strength along with some East Coast USA and many European signals. I tried a few calls on CW to no avail and tuned across the SSB section of the band. Running 30 watts I managed a QSO with special event station 9A282AA before I had to go QRT and enjoy the rest of the day with YL and family.
I was hoping to have got right down to the beach and maybe run the radial wire into the water to see how that would help my signal, but time was against me! Maybe next time! 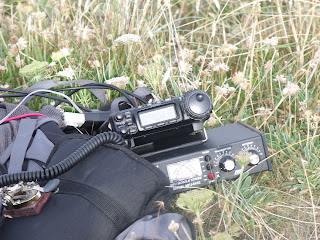 Conditions seemed quite strange today, most of the times I listened the bands seemed pretty flat. However I tuned around 15 metres at teatime and managed to work 7Z1TT on  my first call. Running 100 watts I got a report of 58 on the Antron vertical. Not bad for a CB antenna! 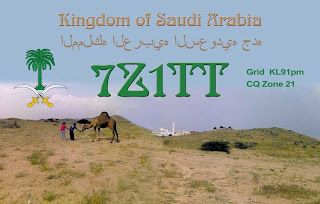 The pole at the end of my garden has just up until now been supporting one end of my HF doublet, and more recently had the Wellbrook receive loop on top of it. The Wellbrook loop doesn't need much height in reality. At my previous QTH it was mounted  less than three metres from the ground and worked well especially on the lower bands. It didn't seem to work much better in its new home at around 7 metres up on the pole.
So I have had a change around. I dropped the pole down on the weekend. I will find a new home for the Wellbrook, in the meantime I have put a vertical antenna on the pole. What antenna? An Antron 99. Yes its a CB antenna but at the radio rally I attended the other week I picked up "Practical Wireless's" book "Even more out of thin air". This book mentions the fact that the Antron is usable on 18,21 and 24 Mhz as well as we would expect 28mhz. I decided to purchase one and give it a try, being of glassfibre construction it is lightweight and hopefully will not put too much strain on my unguyed pole!

The antenna is 5.6 metres long, has no radials  and comes pre tuned to the lower end of 27Mhz. Since at the very least I wanted to use the antenna on 10 metres I adjusted the "tuning rings" at the base of the antenna, hoping to raise the operating frequency a little. This was still when the antenna was on the ground so the adjustment was guesswork! 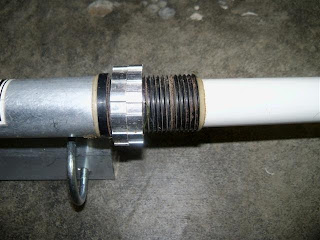 As it turned out I guessed fairly well. Once up in the  air the antenna covered 28 to 29.6 Mhz with an acceptable SWR reading. Digging out the CB rig I have in the shack the SWR on 27 mhz was still within acceptable limits (below 1.5:1) so this is a pretty wideband antenna.
The surprising thing is the Antron covered 24, and 18 mhz without an ATU.

The Western HF-10 wire  doublet I use gives me pretty good results but I never really heard much on 24Mhz (12metres) with it. The vertical seems more lively on this band as well as 21 Mhz. In fact I worked LU8EEM on my first call with it.

My very quick evaluation of the antenna so far is as follows:

28Mhz- works well but as far as signals heard to date goes is about equal to the HF wire, sometimes slightly down.

18Mhz- Two or three S points weaker than signals on the wire.

It will be interesting to compare this antenna with the Hygain AV12 Vertical when I get that erected. However the AV12 covers only 20,15 and 10. 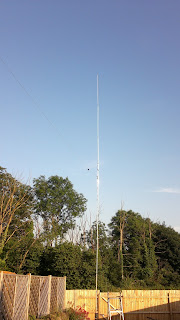 Here it is up in the air, the visual impact is pretty low I think and I haven't had any adverse comments from my (very tolerant) neighbours.

I have owned my Yaesu  FT857D for about 9 years. I bought it to use portable and apart from a stint in the shack as a 6 and 2 metre rig that is what it has been used for.
However portable work usually involves less than efficient antennas, or at least the way I do portable does! In the past I have used the Buddistick and now I have the Pro Whip vertical, for what they are the antennas work quite well but are not as effective of course as my doublet at home.
To make the best of things then I need to use CW. My CW is still a bit hesitant but is coming along and of course I need to practice more! The 857 however doesn't have a CW filter and the standard SSB filter is a bit wide for CW when the bands are busy.
So I decided to bite the bullet and order and fit the 500hz CW filter for my 857. 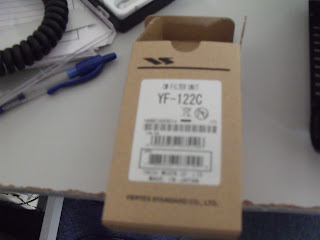 So eager to install it I set about removing the top cover of the rig. I have never needed to take the cases off the 857 before, but I thought it would be easy enough, just remove the screws at the top......................but wait....the covers would not come off! The Answer? Read the manual, you have to remove these screws which are attached to the bottom panel too! 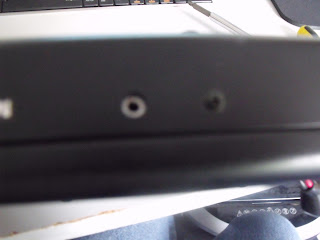 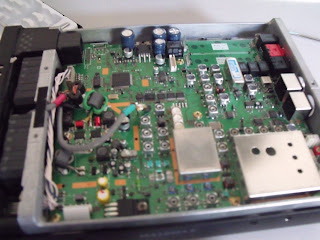 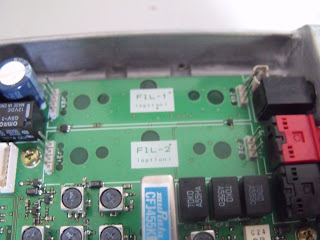 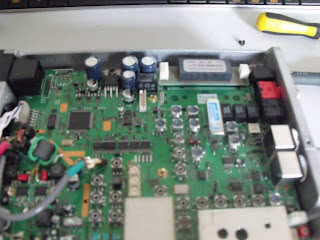 There is still space for another filter so I could add the 300hz one but I don't think I will need it and they are very expensive.

Anyway I put the rig back together and switched on: 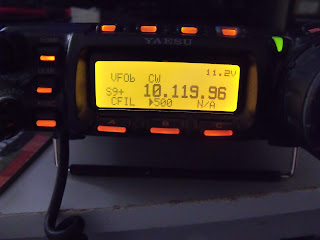 As you can see the rig has recognised it has a 500hz filter so all is well. The filter makes quite a difference so it should give me an incentive to operate CW on holiday!
Posted by GW0KIG at 21:22 5 comments:

Update on the RTL dongle

I have had a little time now to play around with my low cost Digital TV dongle. It works well enough, the specification that came with it stated the frequency coverage to be 48Mhz up to 863 Mhz. It is however wider than that. I have detected (very) local signals in the 27Mhz range and the unit works up to over 1Ghz.

Using a program called RTL1090 in conjunction with the "Planeplotter" software I am able to decode live position transmissions on 1.090Ghz from aircraft flying locally. All this using the tiny "mag mount " antenna which is about 15cms long that came with the dongle. The antenna is sitting on top of my R1000
receiver on the shack desk. Now personally this is part of the hobby (receiving aircraft transmissions etc) that I have never been particularly interested in but it is quite compelling to see the aicraft symbols pop up on the screen and amazing to see what this little device can do. 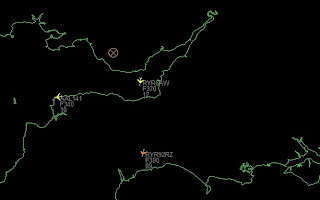