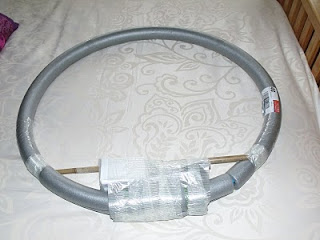 My Wellbrook loop arrived today. The postman that delivered it was a little bemused by the shape of the parcel saying it was the most unusual one he had ever delivered!

My Loop is the LA5030 Indoor. I decided on this model as I thought it would be the best of both worlds- it is suitable for loft mounting but also suitable for use outdoors. My plan was to install it temporarily in the loft and then later to mount it outside in the garden. In fact I have a spare run of Coax waiting for it.

Anyway for now I have popped it into the loft and stolen the feeder for my Loft 50Mhz dipole to feed it for now.

I have not had much time to evaluate the loop yet but my initial thoughts are it is a well made piece of kit. It is certainly directional on lower frequencies. This would be a good antenna for anyone interested in the Non Directional beacons below the MW band, the antenna seems very sensitive there.

Considering it is in the loft, which is not a good location for any antenna it is not picking up that much noise. It is certainly quieter than a wire antenna would be in this situation. On 80 metres receive it is quieter than my outdoor random wire and is on a par with my inverted L which I use for transmitting on 80. On 40 metres so far the outdoor wire is far superior- that was something of a surprise!

There is no doubt that this antenna will perform much better outside.  I intend to evaluate it it whilst its in the loft for a little while, but If I get time over the Christmas break I will put it up at the end of the garden. I will post some more views on this antenna soon.

The top picture shows the antenna as it came through the post, the bottom one is the loop naked, so to speak! 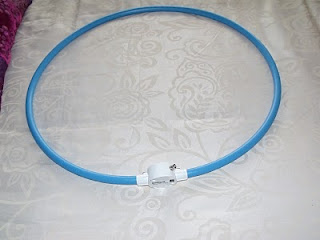