Some time ago I borrowed an old KW1000 linear amplifier from a local radio amateur friend. It had been here on long term loan for some time. My friend used it mainly on modes like DRM (digital SSTV) on 80 and 20 metres. Driving the linear with 10 watts it would happily run these high duty cycle modes giving around 100 watts.

Now this is a vintage piece of gear, at least 40 years old and surprisingly there is not that much information about it on the net although I do have a manual and circuit diagram for it. 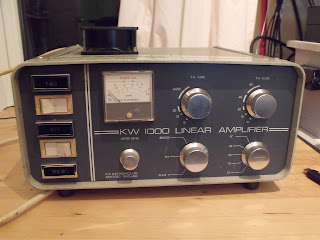 Now I had been warned that the output valves (or "tubes") were probably "soft" and this was likely to be the reason for the low output. indeed the linear should have been capable of a higher output on its current best band of 40 metres!

To cut a long story short the owner of the KW had bought another old linear (A Yeasu FL2100) and offered me the KW at a knock down price, too good to resist. So now owning the linear I thought I would treat it to a new set of 572B valves. I sourced a matched pair of Chinese made 572bs and ordered them up. They were quite expensive, in fact costing more than I paid for the linear itself!

When the new valves arrived I set about removing the covers of the linear, not an easy task on the KW1000 I think the case is truly a horrible design for easy access! 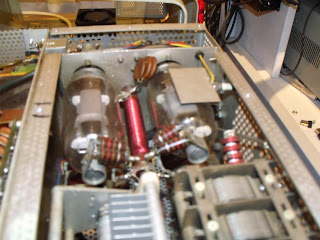 It took me almost an hour to get to this stage!

The 572Bs were then removed. Far from being a matched pair the existing valves were not even a pair. One was a Chinese made valve, the other a U.S.A branded "Cetron". They didnt look physically damaged in anyway unlike the 6146bs I removed from my TS830 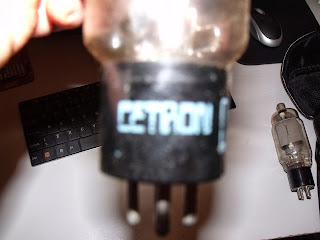 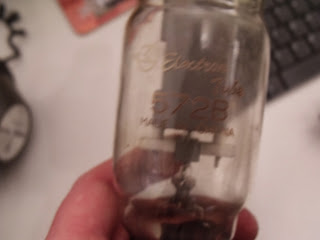 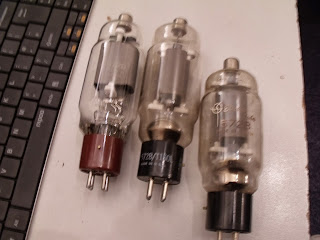 One of the new 572's on left with the two old ones. The glass envelope looks a lot cleaner on the new one.

Anyway I fitted the new valves and well............errr very little difference- everything works but output power still down. So what next? Well on 80 metres the load control is fully closed yet It looks as if I need more capacitance. with some help I think we have identified a capacitor that it switched in on 80 in series with the load control- this may need replacing plus there are some other issues that may need work- watch this space! Given the voltages inside however I am VERY wary and extremely careful when working on this unit.

I am hoping to get this linear working a little better. It does seem more robust and easier to use than the "Loudenboomer" I still have here in the shack.
Posted by GW0KIG at 21:22