Back around 15 years ago or so I bought a Drake R8A receiver. It was the first real top- flight receiver I had owned and I remember being very impressed with it. I even used it with some PC software which back then was quite a novelty being able to tune a radio using the PC. Eventually I sold this receiver, I can’t remember why now but it was probably to fund some new shack equipment. I regretted selling it soon enough but these receivers seem fairly rare in the UK so I never managed to pick up another.
Although I have held an amateur radio licence for over 30 years and am active on the bands from time to time I have always been an SWL at heart and always have a few dedicated receivers in the shack. In recent years I have had receivers which were top of the range in their day. I still have an Icom R70 and a Kenwood R5000 here, both still very good performers.
Just before Christmas however I spotted a Drake R8B on Ebay. It was advertised as having a fault. That fault was that on switch on the radio showed “PWRLOS” on the display. This is in fact not a fault, it simply means that the receiver had been unplugged from the mains supply, the internal clock has lost the time and needs resetting. If this was the only fault then there should be no problems.
I took a gamble and bid and won the receiver. It didn’t sell at a particularly cheap price but then again it sold for lower than I would expect, no doubt due to the advertised “Fault”.
Well the receiver duly arrived and on unboxing it I found I was lucky. Resetting the clock fixed things and I had an operating R8B. A quick wipe with a cloth and a little polish and the receiver seemed in good condition.

Well how does it compare to the other receivers I have? One thing I had forgotten from my old days of Drake ownership. It dwarfs the R5000 and is substantially bigger than the Icom R70. 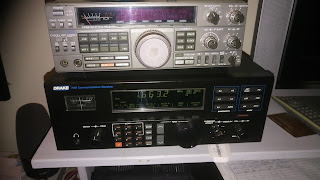 Build quality is not as good as either rig. It seems more flimsy than the R5000 and the R70 which is built like a tank! The Drake has a very light feeling VFO knob too!


This may sound like I am disappointed with this set, but actually I am not. The audio quality on the R8A once you plug in an external speaker is superb. It has a good range of IF filters 6,4,2.3,1.8 and 0.5khz, effective passband tuning and notch filter and synchronous AM detection.  It would be ideal for a Medium Wave Dxer as it has good sensitivity through the band. I also find the numeric keypad ideal for navigating the bands just by punching in a frequecncy.It is also controllable via a PC although getting suitable software for it these days will be a challenge.
Posted by GW0KIG at 18:38