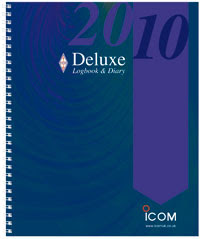 Last year as my old  paper logbook was filling up I decided to buy a "Deluxe" logbook as offereed by the RSGB (Radio Society of Great Britain). I have written about logging before, personally although we are no longer obliged to do so in the UK I still like to log all my contacts. Whilst all my data mode contacts get automatically logged in the DIGIPAN software  I think its good to have a written records also.
Anyway, back to my deluxe logbook, it was very nice packed full of information about bandplans, repeaters, country prefixes and so on. There was even a diary section, oh and of course a logbook section. I started this new logbook in October last and and by the middle of this week I had filled it. That may sound like I am a very active Radio Amateur but thats not really true. You see with all the additional information built into this logbook there isn't much room left for actual logging. I worked out that the Deluxe logbook could hold details of a maximum of 600 contacts. The traditonal logbook which doesn't have all the additional pages can take over 2000 contacts. No prizes for guessing which type of log I am using now. I guess I should get used to doing all of this electronically on the PC. In fact all of my contacts up to the year 2000 are on an electronic log, but not since then. I don't really want to spend hours inputting old logs either, so I will carry on with using paper for now!
I have had some recent success decoding OLIVIA transmissions on 20 metres. I note that most stations seem to use the 32/1000 settings. I still haven't tried a CQ call in that mode yet. I have also head some of the new mode ROS around the same frequencies although that mode doesn't seem particularly active.
This week I was operating on 4 metres using my loft mounted dipole. I received a report of "5 and 9" from a station I could barely hear, in fact he was only just above the minimum squelch threshold on my Ascom SE550 rig. I immediately suspected that my rig was more than a little deaf. Since I have only used 4 metres from this QTH for very local contacts it would be difficult to tell.Anyway up into the loft I went and dug out my other 4 metres rig, an old, 16 channel Pye MX294. No bells and whistles on this rig, and with a TX power output of only around 6 watts the range should be down on the 25watt Ascom rig. Early indications are though that this rig has a much better set of ears!
Posted by GW0KIG at 15:27