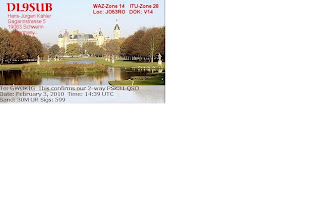 Radio time this weekend has been a bit limited so yesterday I set up the TS450S and inverted L on WSPR and let it run on 30 metres whilst I was doing other things. In fact I let it run overnight on Saturday and was interested to see that the 30 metre band didn't die at all during the night- previously I was lucky to hear anything after 2200. In the wee small hours my 1watt signal was heard in VK land as well as Stateside and throughout Europe. On Sunday morning I switched over to 10 metres, with no results but moving down to 12 metres heard an EA station.

Interestingly I worked a bit of 40metres SSB this afternoon on my Random wire ("The antenna that shouldn't work") and spoke to a G3 station with an interesting antenna. He was also using a random long wire which started within the integral garage at his home and was actually wound around the garage several times. He told me he didn't use an ATU, he simply adjusted the length until the antenna resonated on 40 metres. The only problem he had with thus setup was that if he removed his car, or any other metal items that were stored in the garage the antenna went off resonance and refused to match! Its amazing at what can be made to work as an antenna on the HF bands!
A random picture accompanying this entry- an EQSL recently received from DL9SUB.