I'm not a great fan of contests but they are a useful way of getting some contacts in the log as contesters want to work as many stations as possible! I had a tune around the HF bands this morning and early afternoon and found the CQ Worldwide contest underway.
I have been at this QTH now for 18 months and since then I don't think I have had one contact on 15 metres. Maybe I have not been around at the right time but whenever I have tuned the band its been dead. Today I have been working 15 metres and the band has been full of contest stations. Mainly European stuff but I did work into Tunisia and heard (but not worked) a stateside station. On 10 metres there were a few Europeans again and I heard (but sadly could not work!) ZS9X, A surprise signal on 10 metres.
All this makes me think, when we think the higher bands are dead  are they really dead or is it simply a lack of activity? I think I should call CQ more often. 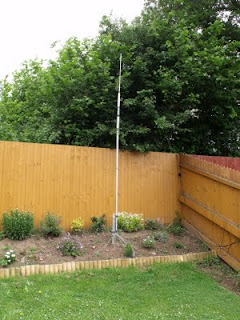 At least today I was able to give my ground mounted vertical, the HYgain AV12 an airing. It seems to work quite well, although I have never been able to get the tuning quite right on 15m. I will have another go at it in the spring but at best the SWR on 15M is around 2:1. It still seems to work OK though and the matching is pretty good on 20 metres and 10m. The picture shows the AV 12 ground mounted in the corner of my garden. Its pretty low profile but I have been toying with the idea of mounting it on a pole and risking the wrath of the neighbours.....maybe next year!
Posted by GW0KIG at 14:34