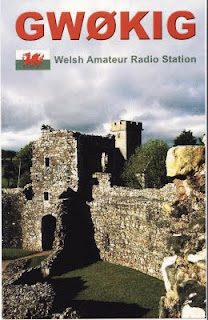 My new QSL Cards arrived today. I have been at this QTH for 18 months now so I thought I had better get some done. The picture is of Coity Castle, which is just down the road from my location. This is the first proper QSL card I have had for many years. In the past because I haven't been that active on HF if anyone really needed a card I printed one up on my PC. I also use EQSL which is a very useful facility but many people still prefer the traditonal paper QSL. Now all I have to do is sit down and write out about 200 of these to cover the recent PSK31 QSOs that I've had!

QSL cards are of course not just confined to amateur radio. For years most of the broadcast stations on shortwave issued QSL cards to their listeners in return for reception reports. As a youngster I sent many reports to broadcasters and still have the QSL cards.The Broadcaster Radio Sweden has recently announced that it is going to stop issuing QSL cards. It got me wondering how many broadcasters still QSL? Maybe I should try sending some reception reports , of course many of the well known shortwave broadcasters have left the airwaves, in favour of the internet. I wonder if electronic QSLing will eventually overtake the paper QSLs? I believe for DXCC awards paper QSLs are still required Anyway here is a QSL card from Radio Sweden which I received back in 1984! 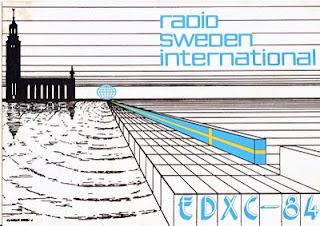