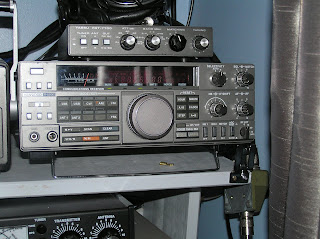 Spent quite a bit of time shortwave listening this morning, for once the noise level here was fairly low (its often quite noisy on weekends) so it made a nice change.
Later on I did a bit of PSK on 30 metres and that band seemed in good shape too. Perhaps conditions are on the up, I noticed some CW activity on 15m yesterday, its been quite a while since I've heard anything on that band.
I thought I'd include a run down on the station equipment in this posting, as you will see its nothing spectacular at the moment but it keeps me busy!
On the HF bands I have the Yaesu FT1000MP. Its one of the few pieces of equipment that I have had from new. I also have an old Trio TS830s, I use that rig for data (PSK) and the Ft1000 for phone. HF antennas are either my home brew inverted L or a ground mounted Hy Gain AV12 verrtical which covers 10-15-20 metres.
On VHF/UHF I have a Yaesu FT857D, running into a dual band vertical and also a loft mounted dipole for 6metres. Oh I also have an Ascom PMR rig for 4 metres (70Mhz) running into a loft mounted dipole.
My main receiver is a Kenwood R5000 and this uses a longwire fed by a 4:1 balun. The Kenwood was a top flight receiver in its day. I didn't pay a lot for mine as its a little bit scruffy cosmetically but it works well. My R5000 is pictured above.
Posted by GW0KIG at 19:53