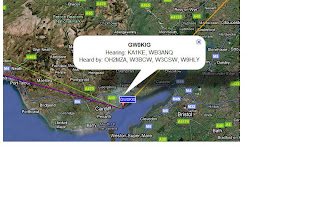 On my last blog entry Bas PE4BAS, pointed out that it was easily possible to go QRP with my TS830s simply by altering the output of my PC soundcard! Now why didn't I think of that?? Its a lot easier using data, with a voice transmission simply cranking down the mic gain won't work.
Anyway having set the power to 10 watts using the TS830 Mic gain, a liitle tweak of my soundcards volume setting and I was running under 5 watts.
Incidentally whilst experimenting and trying to reduce power I had 3 PSK31 contacts on 30 metres. 2 Russian contacts and one into Germany, all on around 4 watts!
Anyway last night I downloaded the WSPR software and after studying the excellent instructions written by Julian G4ILO I was up and running. I am still finding my way around the software and need to do a bit more reading up on WSPR but last night I was rewarded with being heard by an OH2, a WB3, two W3's and A W9. All with 5 watts on 30 metres. Now I have worked Stateside on PSK31 on 30 metres in the past but I was running around 40 watts then. WSPR looks a really interesting mode. I intend to run it when I am not using the 830s for anything else. Of course not being licensed to run an unattended station it means that I cannot run WSPR when I am not at home. It would be most interesting to run 24/7 for a while. As i understand it this is not a mode that could be used for a QSO but it is a very good way of measuring propagation conditions.
Interstingly the PSK section of 30 metres seemed all but dead just before I set up WSPR so I was suprised that my signal made it to the USA!
Posted by GW0KIG at 17:07